A GIFT of READING 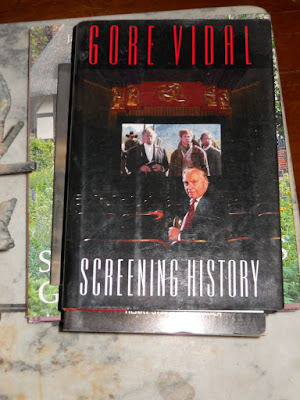 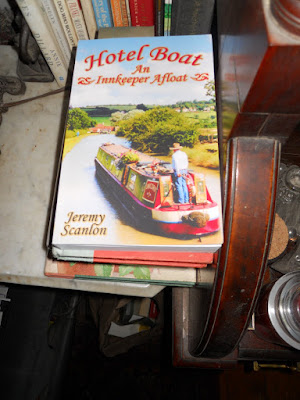 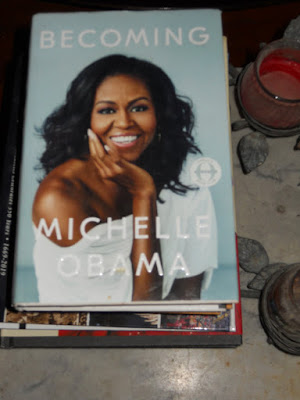 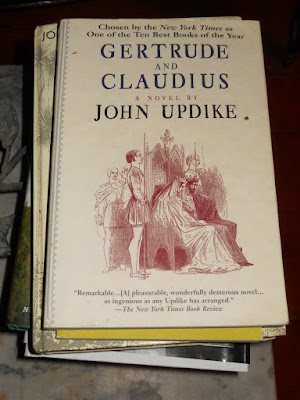 .
This one was a Gift I'm still reading.
So far-Wow.
Sean Woods of Rolling Stone wrote: "In his masterful new book...Grann chronicles a tale of murder, betrayal, heroism and a nation's struggle to leave its frontier culture behind and enter the modern world... Filled with almost mythic characters from our past – stoic Texas Rangers, corrupt robber barons, private detectives, and murderous desperadoes like the Al Spencer gang – Grann's story amounts to a secret history of the American frontier."
A reviewer of Publishers Weekly stated "New Yorker staff writer Grann (The Lost City of Z) burnishes his reputation as a brilliant storyteller in this gripping true-crime narrative, which revisits a baffling and frightening—and relatively unknown—spree of murders occurring mostly in Oklahoma during the 1920s."
And, Ed Vulliamy of The Guardian said "The genocide by white America against Native nations during the century leading up to Grann’s period is a metaphor for humanity’s decimation of the natural world which the Natives saw as sacred. Grann’s book is a timely and disturbing chapter in the original, terrible atrocity."
Published April 18, 2017
https://en.wikipedia.org/wiki/Killers_of_the_Flower_Moon 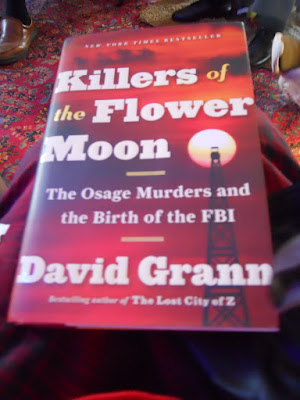 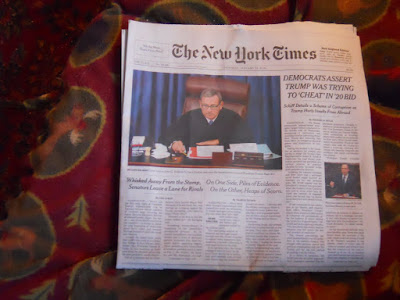 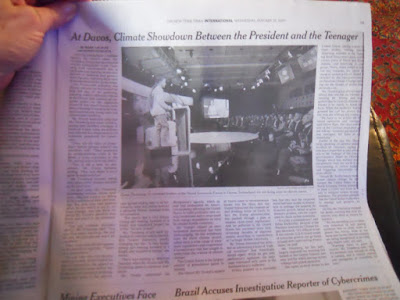 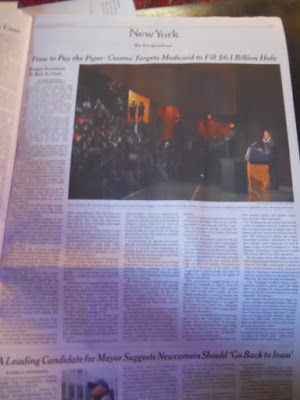 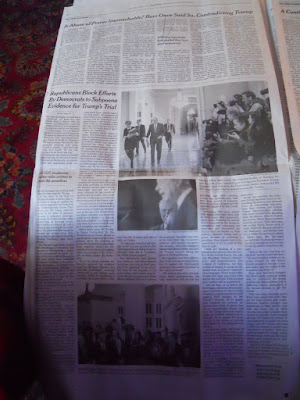 AND TIME
I had Stars and Snow, Moon and Sun,
Cats and a Dog, Squirrel and Possum,
Mourning Dove, Blue Jay, Chickadee, Flicker, and Titmouse in flocks and the occasional hawk. It was a fine rest despite the cold.
A Wonderful Birthday Week
RESTORATIVE
<<>>
More photographs to come...
Posted by Ms. at Saturday, January 25, 2020 1 comment:

Email ThisBlogThis!Share to TwitterShare to FacebookShare to Pinterest
Labels: 'Wessie' Massachusetts Birthday week, "Killers of the Flowering Moon and the Birth of the FBI", New England Wildlife. Restorative

My birthday week in Massachusetts was just what I needed. Delightful in so many ways. Not the least of which was foregoing the internet. 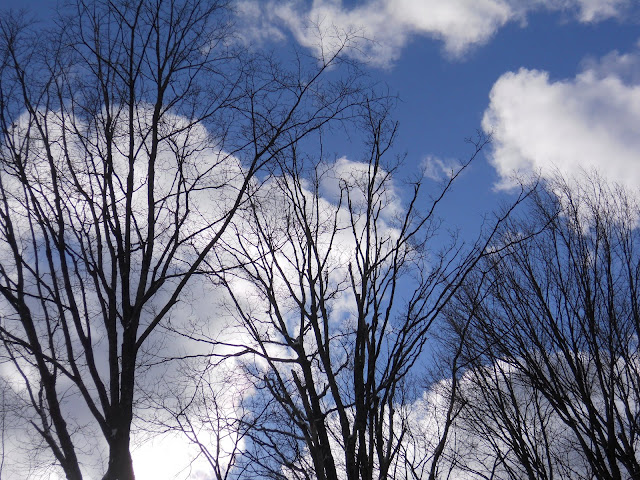 We did pay attention to the impeachment hearings as soon as they commenced and though painfully repetitive as they must be, I was mighty grateful for the articulate and thorough Representative Adam Schiff. See the link to learn more about him if you like. 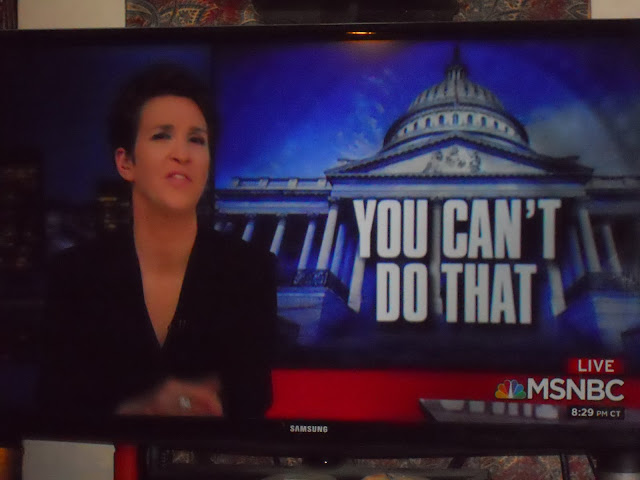 We also viewed "Two Popes" and I sure hope you do too.
Here's the official preview to taste:
https://youtu.be/T5OhkFY1PQE

Many photographs to choose and download in the next few days. For now, just this:

"What needs us
is always near.
Matter of Listening,
bending." 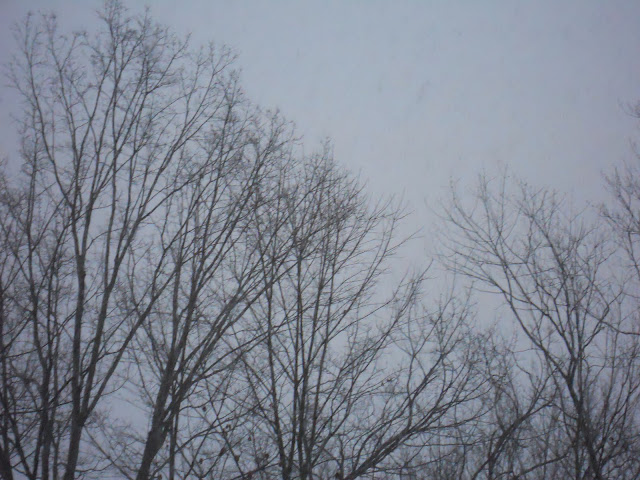 A Self
at Ananda Ashram with 'Shrimati' Donna Viola
Decades Ago 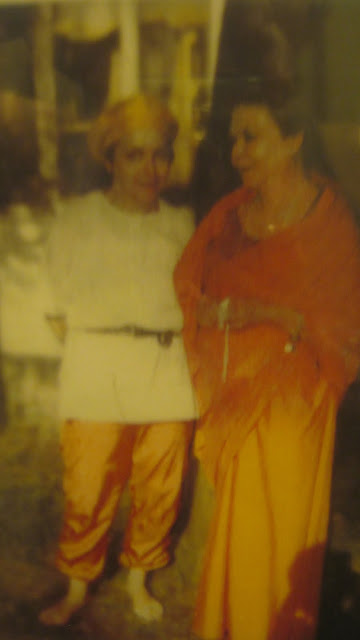 "Sarabande on Attaining the Age of Seventy Seven"
2020
Not this precisely and yet it resonates
https://youtu.be/zvDLHn06KO4

A Tribute Worth Reading
https://www.everseradio.com/neither-does-it-strengthen-the-soul-anthony-hecht-1923-2004

Email ThisBlogThis!Share to TwitterShare to FacebookShare to Pinterest
Labels: "On Attaining the Age of Seventy Seven" read by Tom O'Bedlam, Ananda Self, Tribute to Anthony Hecht

Listen with Love
https://www.youtube.com/watch?v=mNPKBmQ-1go
Yes, all white men in a spacious field and yet they are so very different from one another, earnest and incongruous,, but true and quite beautiful. Made me think of Climate Change-Nature-Her beauty in the moonlight overthrew us. Does mother nature have to tie us to a chair, break us down and cut our hair?  What more proof do we need?
~*~

"Jersey Cow and Calf"
Greeting from a Friend 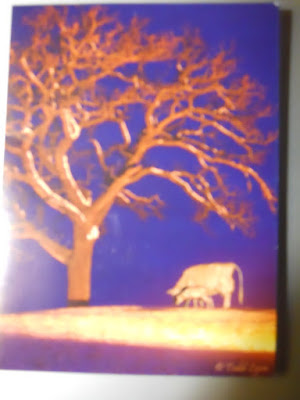 a sculpture by Duffy Lyon in Toledo Ohio
located beneath a beautiful oak tree on the grounds of the Pioneer Hybrids seed corn processing facility there. 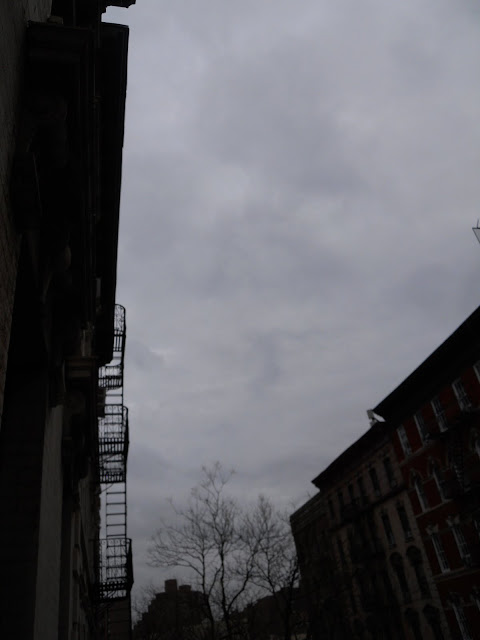 Listened to and Watched
The Democratic Debate
CNN
Everything Changes
Eventually 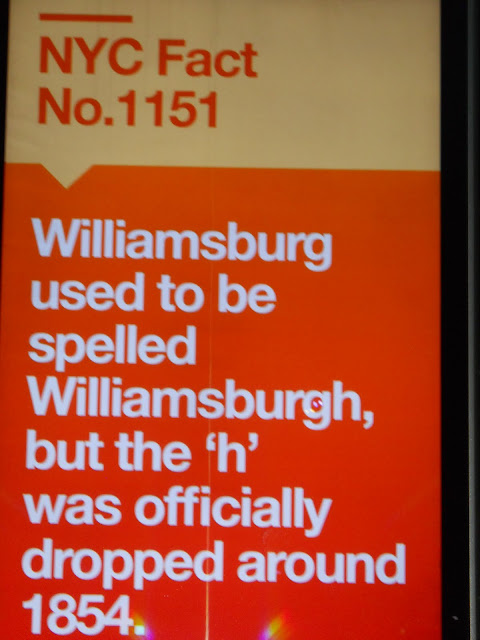 Even in a Country Divided Against Itself
~*~

Farewell A While
January 16th through 23rd Ill be off the internet and in Massachusetts with my oldest friends to celebrate my seventy seventh birthday.
THROWBACK THURSDAY
"Wessie"
January 2016
Have a peek at where I'll be:
https://mscomfortzone.blogspot.com/2017/01/holidaze-2016.html
~*~*~*~ 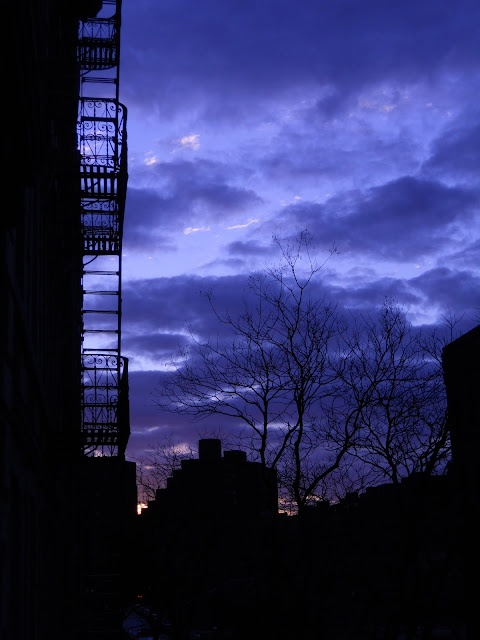 10 a.m.
It Arrives at our Front Window 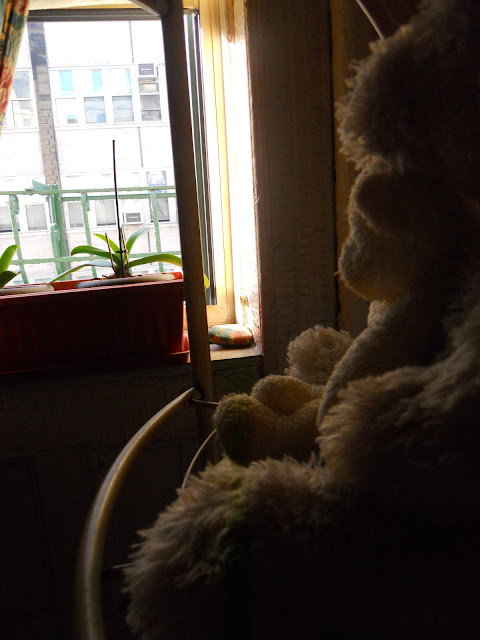 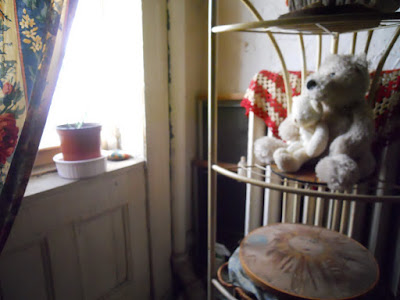 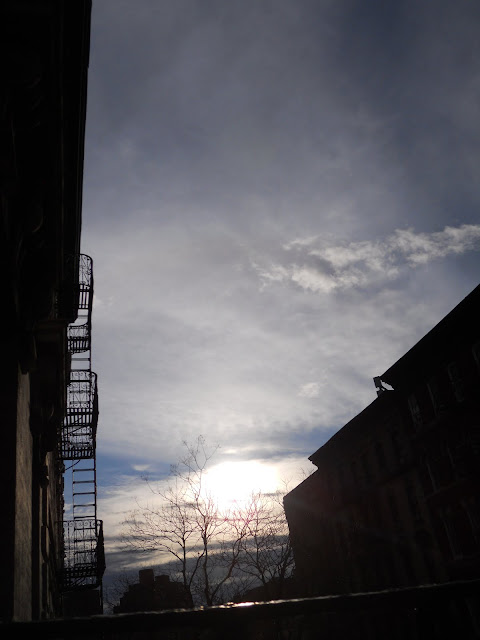 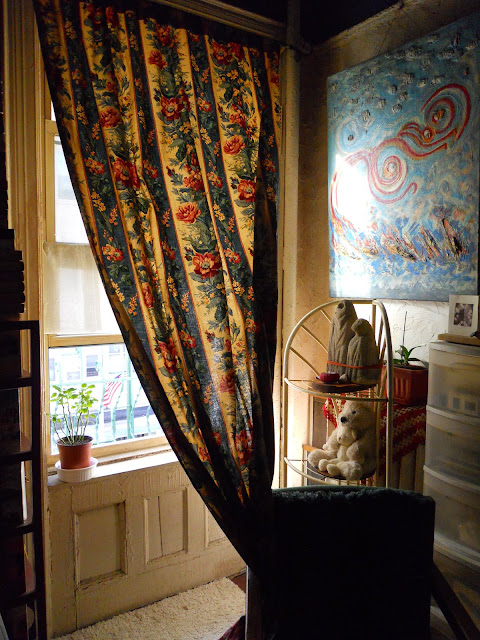 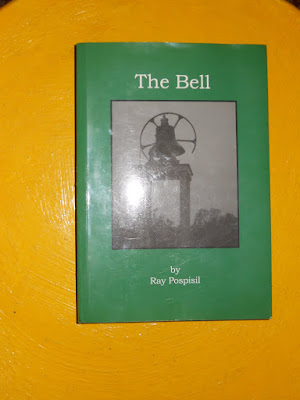 The Ten Commandments
by Ray Pospisil

to smite our foes, we alsoease
the dread from keeping fatty thights
ourselves, and throwing extra greae
on coals to make our smoke there rise

in angel form. No need to heap
the bodies high so we can book
a line of faith, and better reap
at harvest. We're not off the hook

by long-shots, though, and can't just grift
for action now, since God will view
our worship less by goats we lift
on fires than by how I treat you. 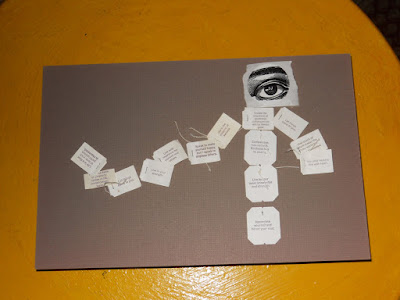 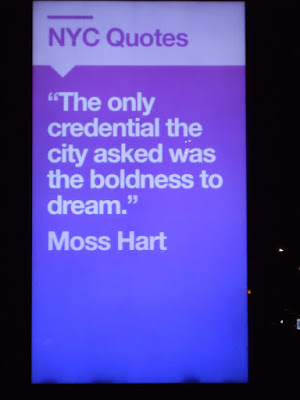 Email ThisBlogThis!Share to TwitterShare to FacebookShare to Pinterest
Labels: "The Ten Commandments by Ray Pospisil, Collage, Street sign, Window views. Previews "The Ides of March" and "The China Syndrome 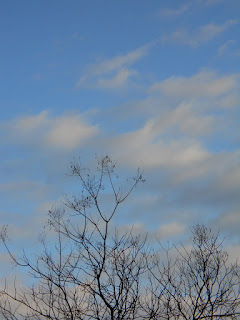 The full moon is at home in the sign of cancer, and it is all about our deepest power, that part of us that is sensitive, loving, nurturing and compassionate.

Simultaneously, the sun, mercury, saturn, and pluto are all in capricorn opposing the full moon, calling us to reconcile and integrate these opposing forces. And since it's a lunar eclipse, everything is intensified.

When we see polarization before us, we are being called to come together in a cooperative and co-creative way to make changes. We need to find within our depths that peace and love which is at the core of all our beings and make an energetic shift in that direction. If enough of us can make the shift, then the ripple effect will be felt everywhere.

Eclipses are wonderful opportunities for positive change if we move through them consciously with positive intent. Eclipses swing open the doors of change, so it's a good idea to remain optimistic and see them as positive catalysts that provide a cosmic platform for movement. Eclipses expose the things we need to change in our lives and propel us to change them, letting past energy that no longer serves us to fall away. What a great opportunity to rewire ourselves! Moving through the shadow and out into the light.

The energies at play right now are pushing us towards a place of fear, defensiveness and reactivity. But we do not have to let fear dictate how we view what's going on in the world and how we respond. We can take a different perspective and create a new story.

When we see destruction happening outside us, it is inviting us to co-create a new reality within us. Let's let go of limiting beliefs, fear-based thinking, unresolved grudges of the past, judgementalism, hatred, and pettiness. Let's visualize the brilliant light of the Moon dissipating the darkness of all the things within us that no longer serves us. Moving into a new reality of kindness and compassion for ourselves and others.

You may want to take time during the eclipse to acknowledge your fears and surrender them to Divine will. Allow the fear to be transformed by faith, and allow the luminosity of the moon to fill you with love and positive energy when she emerges on the other side.

I'd like to invite you to join me tomorrow on Jan 10 during the eclipse (17:07 - 21:12 UT...subtract 5 hours for EST), to visualize world peace, chant, and pray. I am hoping to do a live stream during this time and it will most likely be close to the peak of the eclipse (2:21 PM EST). I will stream from the group page Spiritual Activism for the New Earth. Please join the group if you’d like to tune in.

Leading up to peak eclipse, I will be chanting The Maha Mrityunjaya or Tryamakam mantra. Known as the great death conquering mantra, IT is one of yoga's most important mantras because it restores health and happiness and brings calmness in the face of death...

Next “Om Namo Narayanaya” is a salutation to the god Vishnu, often called “The Preserver” in Hindu mythology. His role is to maintain the world in balance. Therefore, this mantra represents those who seek balance, peace, or equanimity (i.e. mental calmness). 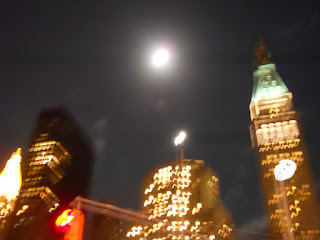 As the Moon begins to re-emerge after the peak of the eclipse I will be chanting “OM chandraya namaha” A Mantra that helps to see things more clearly and look beyond illusions to see the deeper meaning in things and the truth that lies within.

And I will also be chanting the Gayatri Mantra. This mantra is a request to the sun: May we meditate upon your form and be illumined by who you are? (Consider that the sun offers its gift of illumination and energy to all beings, without judgment and without attachment to the outcome of the gift.) 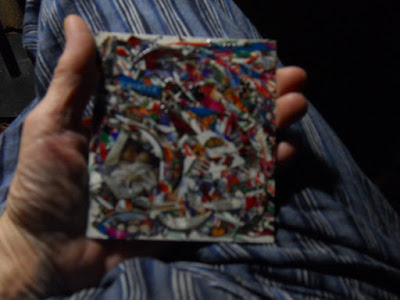 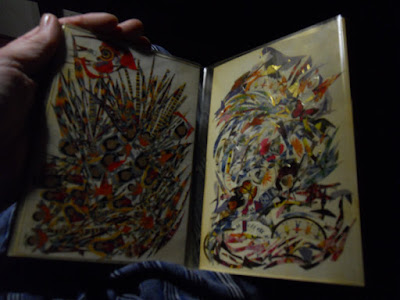 "Despite the pre-twentieth-century use of collage-like application techniques, some art authorities argue that collage, properly speaking, did not emerge until after 1900, in conjunction with the early stages of modernism."
https://en.wikipedia.org/wiki/Collage
~*~ 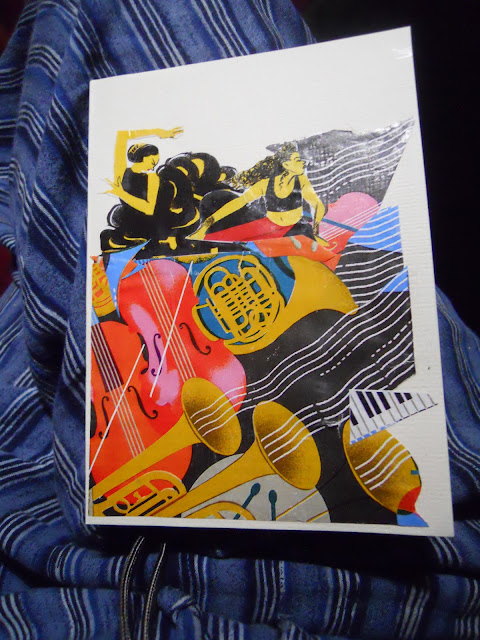 My life as collage
Ms.

These walls, a pastiche of images
Every shelf a combination of things
that might not otherwise occupy contingent space,
or be considered congruent.

Where to rip and what to tear,
where to place a portal and Enter in?
Those are my questions.