Making A Bed
By Howard Moss

I know how to make a bed
While still lying in it, and
Slip out of an imaginary hole
As if I were squeezed out of a tube:
Tug, smooth—the bed is made.
And if resurrections are this easy,
Why then I believe in all of them:
Lazarus rising from his tomb,
Elijah at the vertical—
Though death, I think, has more than clever
Household hints in mind and wants
The bed made, once, and for good.

"We had found out some things to our own satisfaction, but we had no more proof that there had been a murder than we had when we started.  Let alone who had done it.  But that wasn't all; the worst was that there was no place to go from there."

"It was raining; It rained all that Sunday.I wrote some letters and went through two Sunday papers and spent a couple of hours on the roof chinning with Horstmann and looking over the plants,
but no matter what I did I was in a bad humor."

from John McAleer,
Rex Stout: A Biography
Justice Oliver Wendell Holmes died on 6 March 1935, at ninety-four. During the last year of his life he read Fer-de-Lance. After his death, a marginal note he had made was found.  It read:
"This fellow is the best of them all." 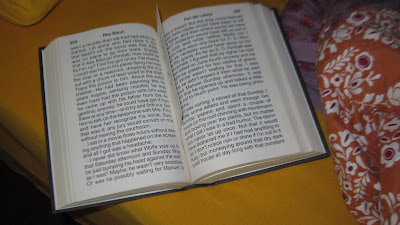 Another early and steadfast admirer was William Faulkner. Carvell Collins, whom Faulkner picked as his literary executor, says: Among the detective fiction Faulkner read, and it was of considerable quantity, he especially liked that by Rex Stout.
One of Mr. Stout's novels which was singled out was
Fer-de-Lance
Posted by Ms. at Wednesday, May 02, 2012

Email ThisBlogThis!Share to TwitterShare to FacebookShare to Pinterest
Labels: "Making A Bed" by Howard Moss (NPR The Writers Almanac)-Candle and Unmade Bed-Hat-Prayer Beads and Book staged by Ms.-Rex Stout's "Fer-De-Lance"

a friend sent this email:
"The poem is so good, but most of all, I liked the way you larded it with your photos, thoughtfully including the hat and book mark between the pages of Fer de Lance. Your candle, bed, prayer beads and book; saffron and red sheets and pillows, like monk's robes. And flowered bits too. I can picture you nesting there. I liked the swatches of biography and the comment by Oliver Wendell Holmes. Too bad he did not live long enough to read the other novels."