TAKING REFUGE FOR THE WEEKEND 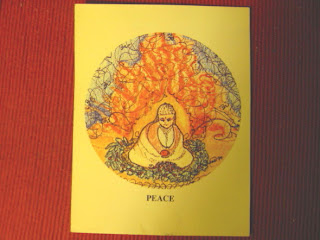 The Three Jewels
Buddha-Dharma-Sangha
Text From "The Jewel Tree of Tibet" by Robert Thurman.
Copyright c 2005 by Bob Thurman, Inc.
Reprinted by permission of Free Press,
a division of Simon and Schuster N.Y.
http://www.beliefnet.com/Faiths/Buddhism/2005/04/The-Three-Jewels-Of-Buddhism.aspx
*
The Four Noble Truths
introduced by Robert Thurman
Robert Thurman
"To answer my critics who accuse me of trying to pretend that every Tibetan was an enlightened yogi, and they never even wiped their butts, and they didn’t have robbers and bandits and ignorant people, and they weren’t cruel ever — like it’s all just some sort of fantasy of mine, well, that isn’t at all the case. My thesis is a sociological one that has to do with mainstream social trends. The fact that a great majority of a country’s single males are monks rather than soldiers is a major social difference. Now, many of those monks might be nasty, they might punch people, some of them might pick your pockets, some of them might be ignorant. They might eat yak meat; they’re not out there petting the yaks. So I am in no way Shangri-La-izing Tibet when I try to develop a non-Orientalist way of appraising and appreciating certain social achievements of Tibet, which really tried to create a fully Buddhist society. But my opponents, who want to adopt the old British attitude that Tibet was dirty, grubby, and backward; or the modernist attitude that it’s a “premodern” undeveloped society; or the attitude of many other Buddhist countries that think Tibet was somehow degenerate because it was very Tantric, and Tantric Buddhism grows out of the degenerate period in India, well… I think these attitudes are mired in the idea that we modern Americans are the most advanced civilization the world has ever seen.
I don’t think that’s the case. I consider us pretty barbaric."(1996 interview for the Utne Reader, Robert Thurman
answers general critics about idealizing Tibet)
http://en.wikipedia.org/wiki/Robert_Thurman
*
Tibet House
N.Y.C.
In 1987 Thurman created Tibet House U.S. with Richard Gere and Phillip Glass
at the request of the Dalai Lama. Tibet House is a nonprofit organization
whose mission is to help preserve Tibetan Culture in exile.
http://www.tibethouse.us/
*
Menla Mountain Retreat
Phoenicia, N.Y
Menla (the Tibetan name for the Medicine Buddha) is a state-of-the-art healing-arts
and conference center grounded in the Tibetan Medical tradition
in conjunction with other holistic paradigms.
http://www.tibethouse.us/menla-mountain
*
Related Posts

'the all is the one and the one is the all'---enjoyed listening to The Four Noble Truths.
wishing you a good weekend.