I think we notice what we notice because our attention is drawn to what already concerns us.

I didn't mention in the previous post the call I placed to The Wild Bird Fund the day before the nest removal operation at my place.  It's a not for profit group in New york.  I wanted to know what to do had I found either an egg or fledgling in the nest.  A very nice fellow named Greg called back after the whole thing was over and resolved without tragedy.  He was happy about the outcome and said if I had any more questions, feel free to call again. 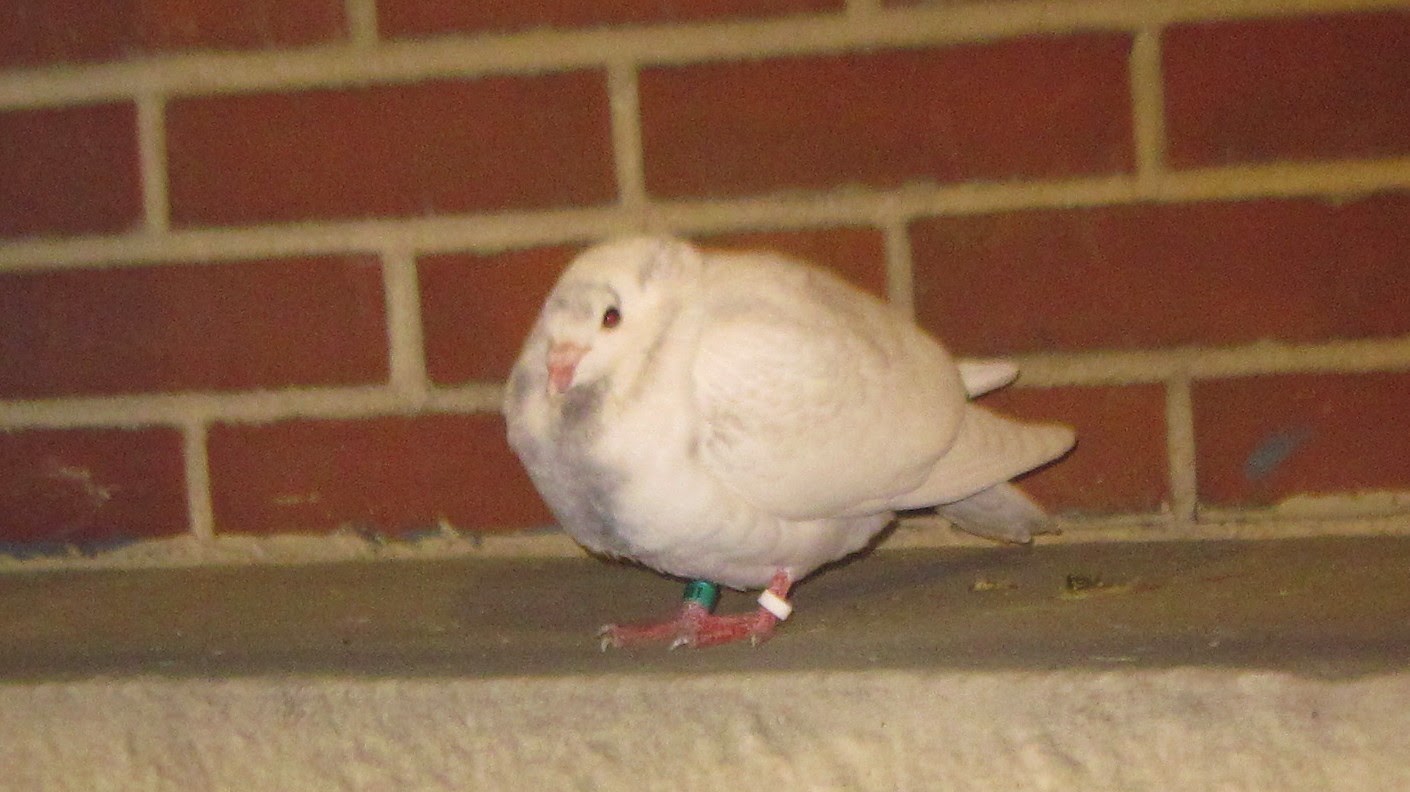 Last night, very late, I took a constitutional around the block to let go of excess energy before going to bed.  What I encountered on the next block, was a juvenile banded pigeon set out to make its own way in the world.  Likely it had fallen from a nest. 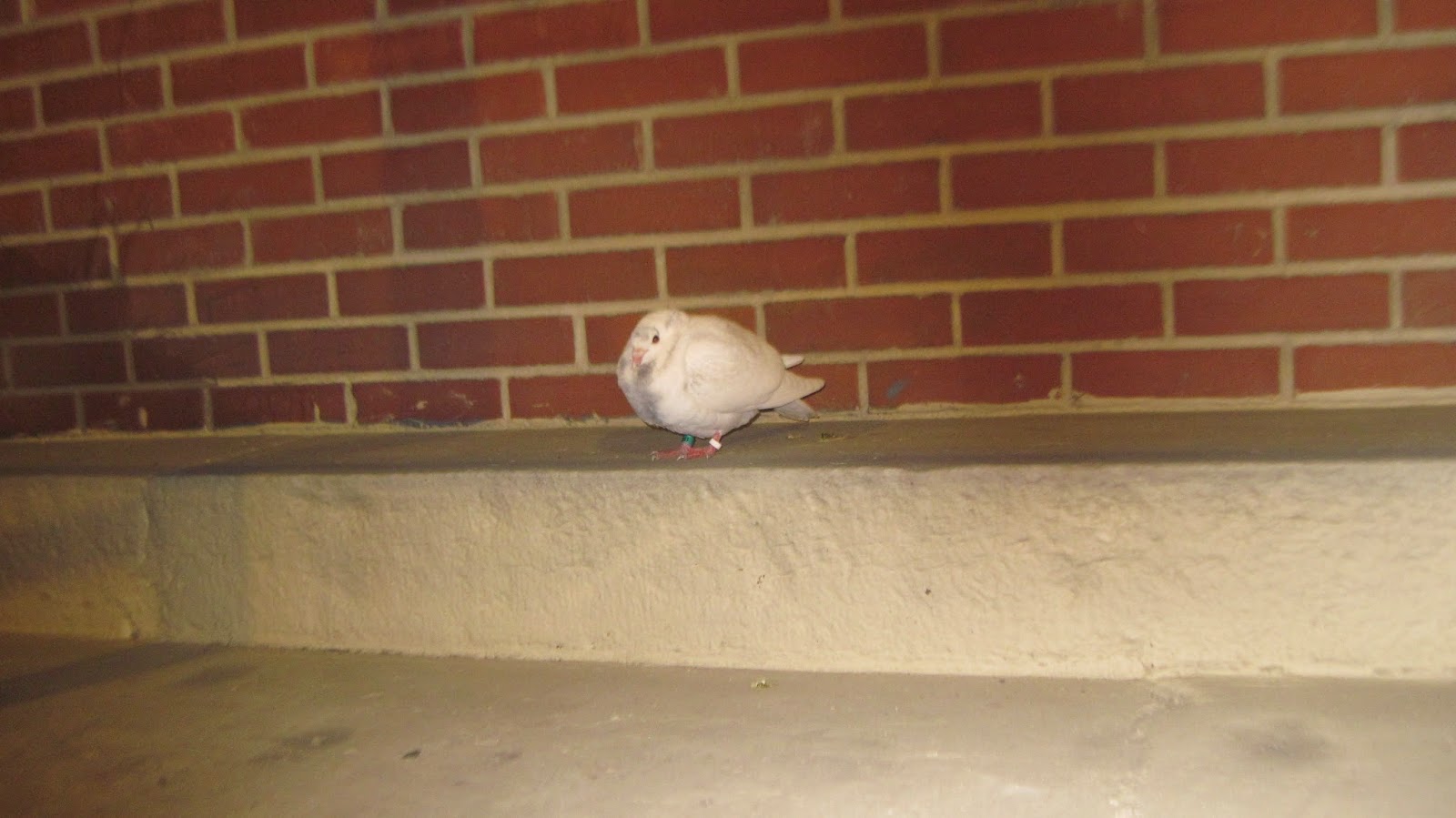 A young man who lives in the building there was walking his rescued dog named 'Mustafa' (it means the chosen one in Arabic).  We conversed about the pigeon and he said he'd keep an eye on the situation.  Fortunately there's a scaffolding, and it's not cold. 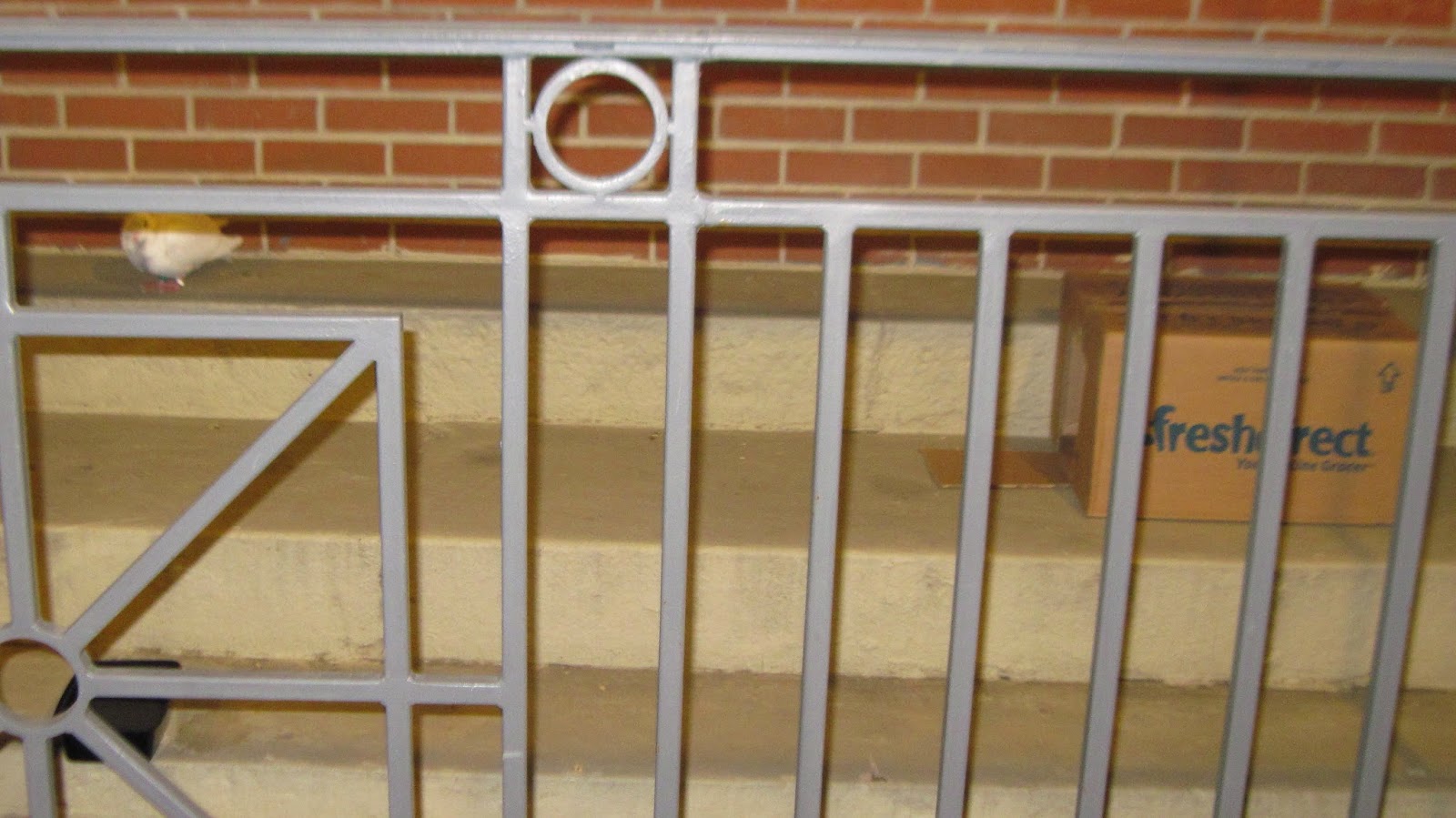 Meanwhile, I hot-footed to a local all night store that knows me and begged pens and paper, made a sign (note the misspelling of juvenile), and placed it. 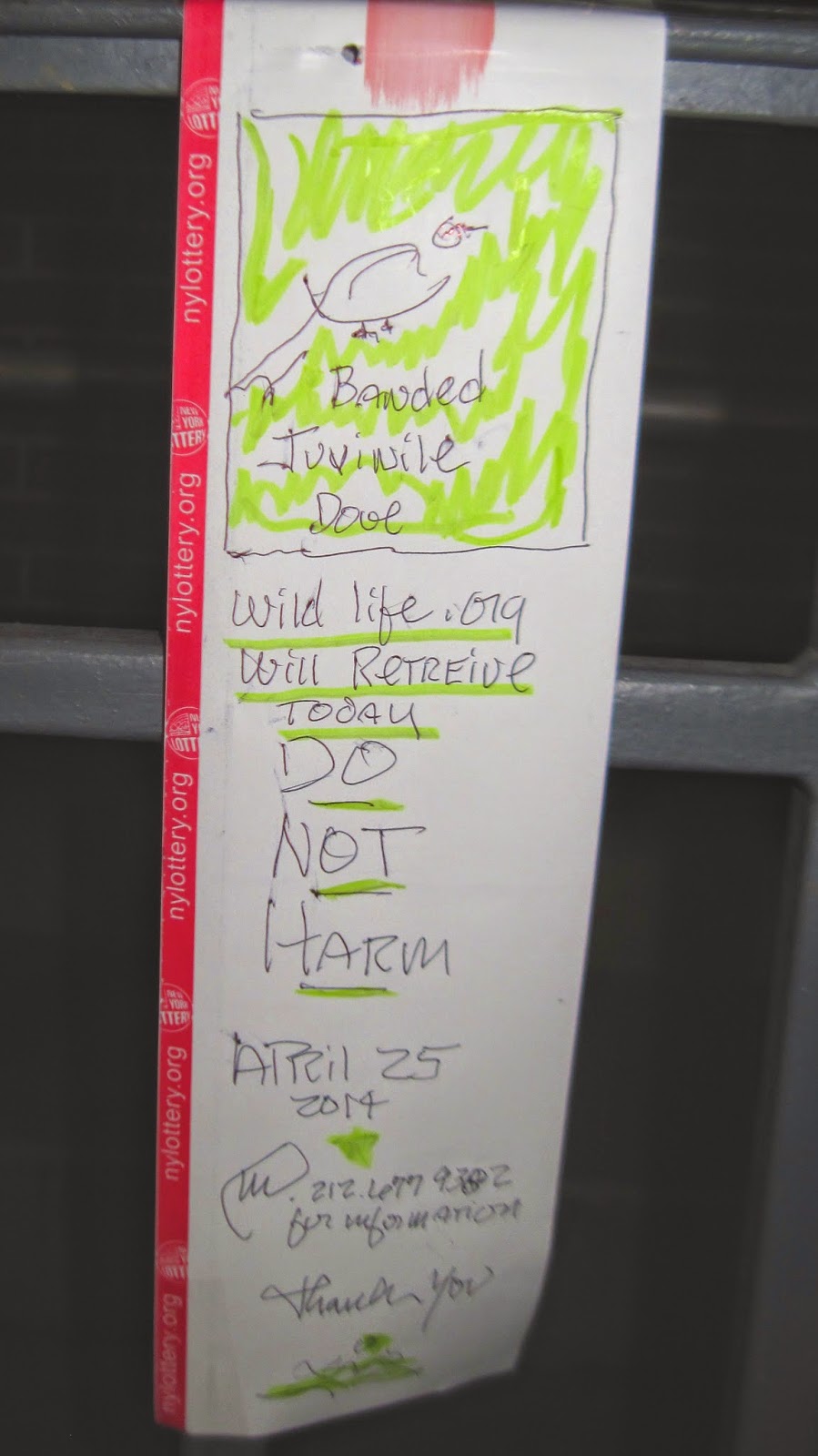 Passing on toward home, I noticed the red tulips have risen despite neglect.  How glad that made me. 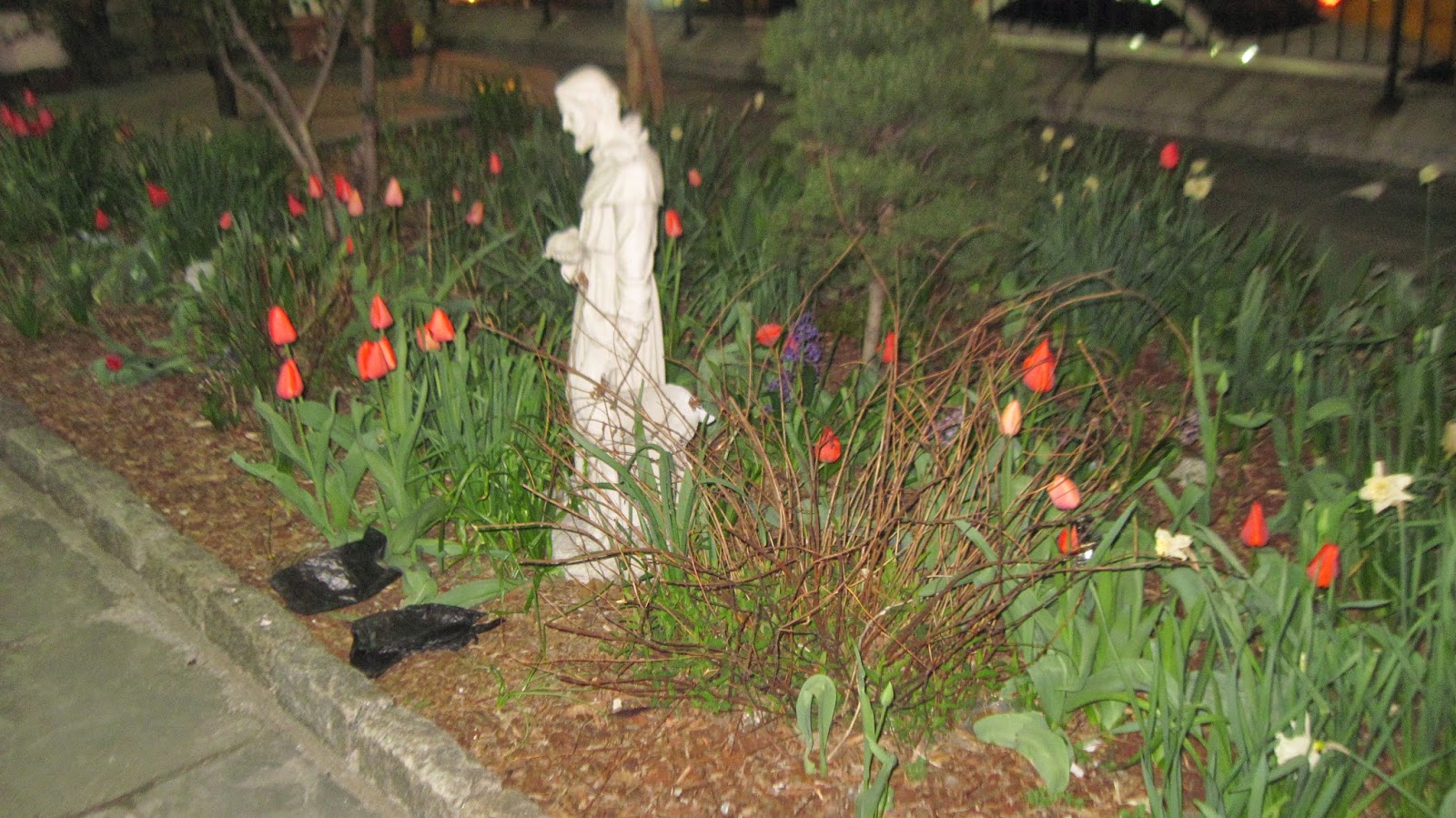 Late as it was, I placed a call again to the fund and left a detailed message with the location,  They have my number if they want to phone me back.
View the site HERE

May all life forms be safe and free of suffering

I love what you did, you are a good soul. Those red tulips are healing, I think -- won't it be interesting to watch beauty persist in that garden? xoxo

the tulips made me glad, too

I love your blog and protection of the pigeon. I've done similarly myself. Isn't that also a statute of St. Francis with the tulips?

(click on picture)
You are always nearer to the true sources of your power than you think. The lure of the distant and the difficult is deceptive.
The great opportunity is where you are. Every place is the center of the world." -John Burroughs-